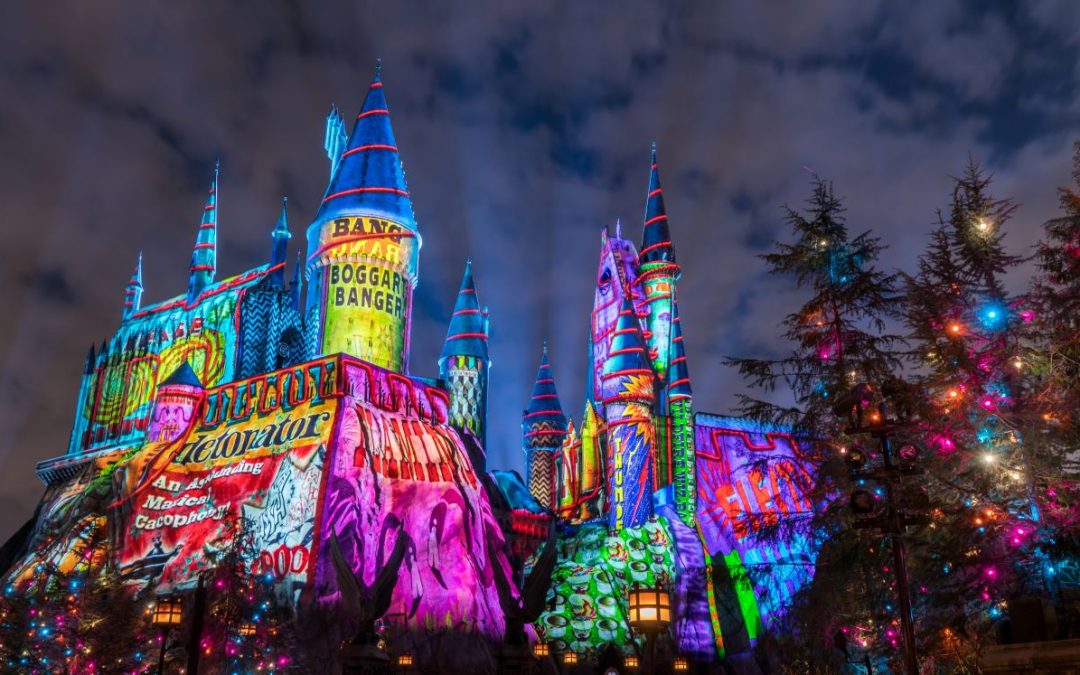 Experience Universal Orlando Resort’s Christmas Celebration 2019 in the only way Universal Orlando knows how—Wonderful, Enchanting and Breathtaking!! Universal Orlando will be decked-out for the holidays from November 16, 2019 to January 5, 2020. Both areas of the Wizarding World of Harry Potter get holiday makeovers with special shows and decorations, however the highlight of the season is the Christmas light show projected onto Hogwarts Castle. The streets of Hogsmeade and Diagon Alley become adorned in themed decorations, garlands and lights with the sounds of special holiday-themed performances filling the air. Guests can hear both magical and Muggle Christmas carols from the Frog Choir – comprised of Hogwarts students and their giant croaking frogs – and the unique holiday hits of one of the wizarding world’s most popular singing sensations, Celestina Warbeck and the Banshees. And, as night falls, guests will revel in a stunning projection of holiday spirit as Christmas moments inspired by J.K. Rowling’s stories come to life on Hogwarts castle for “The Magic of Christmas at Hogwarts Castle.”

Macy’s Holiday Parade will command the streets with all the colorful balloons and floats that New York City gets a chance to enjoy every Thanksgiving. Did you know that as soon as the parade is over in New York the balloons and floats are brought down here for everyone to enjoy!! You will be delighted by the marching bands, clowns, and from the jolly man himself; Santa Claus will make his appearance for all the children. Afterwards, enjoy the magnificent tree lighting ceremony with music and a glittering display of lights! Universal Studios Florida has been bringing Macy’s Holiday Parade down to Orlando for a post-Thanksgiving encore every December for over a decade.

The Grinch is right at home at Universal Orlando’s holiday event in the Seuss Landing section of Islands of Adventure. In addition to scoring a private audience with the reformed “mean one,” visitors can see The Grinch and his newfound Whoville buddies present The Grinchmas Wholiday Spectacular. Make sure you get a chance to see the live performance of the star of the show, The Grinch™, and get your picture taken with the mean green character himself!

Mannheim Steamroller is a multi-platinum selling musical group that combines classical music with new age rock to create contemporary Christmas music with a unique sound. This group performs some of their most-loved songs on the Music Plaza Stage in Universal Studios Florida on select nights in December. Enjoy holiday tunes as the best-selling holiday artist of all time, Manheim Steamroller, returns to Universal Studios Florida to fill the air with the sounds of the season. Guests can take in live concerts at the Music Plaza Stage on the following nights: November 16, 17, 23, 24, and 30, and December 1, 7, 8, 14 and 15.

Orlando Ticket Connection wants you to have the very best Universal Christmas ever! We are offering a 2 day Park to Park ticket Get 3rd Day FREE! Click here to buy!