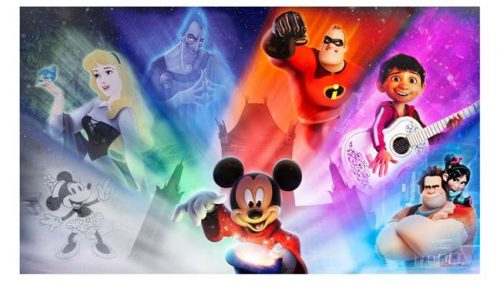 Here’s a taste of how Guests can celebrate the milestone anniversary at the park on May 1, 2019:

Grab Exclusive 30th Anniversary Merchandise – Special 30th anniversary merchandise will be unveiled on May 1, including a new adult T-shirt, baseball cap, Tervis 24-oz tumbler, MagicBand, ornament and much more. Annual passholders can also shop for some items exclusively created for them. Merchandise can be found starting at 8 a.m. in Grand Park, while supplies last. (Please note: Merchandise will go on sale at 8 a.m., Disney’s Hollywood Studios opens at 9 a.m.)

Stay For the Debut of “Wonderful World of Animation” – The park’s new nighttime projection show will light up the park for its official debut on May 1, 2019. Your Guests can watch in wonder as the façade of the Chinese Theatre is magically transformed – displaying this stirring tribute to animation. Behold spectacular sequences celebrating themes like magic, family, adventure, romance and friendship.

Each theme is brought to life through unforgettable moments from beloved films—like “Sleeping Beauty,” “The Incredibles,” “Coco” and many more. The show will debut at 9:05 p.m. ET, just prior to the park’s “Star Wars: A Galactic Spectacular” fireworks show.

If your Guests want to make the absolute most of the 30th anniversary fun, they can attend the Disney After Hours Event Night that has been added to the schedule for May 1, 2019. Attendees can experience little to no-wait on park favorites, including The Twilight Zone Tower of Terror, Rock ‘n’ Roller Coaster Starring Aerosmith, Toy Story Land attractions and more. Additionally, this special anniversary edition of Disney After Hours will feature some beloved Disney characters ready to greet guests in the Chinese Theatre Courtyard, at Star Wars Launch Bay and more. There will also be a special encore performance of “Wonderful World of Animation” taking place exclusively for event attendees.

Orlando Ticket Connection will be there to bring you all the updates, so make sure to check back and don’t forget some of the lowest prices.