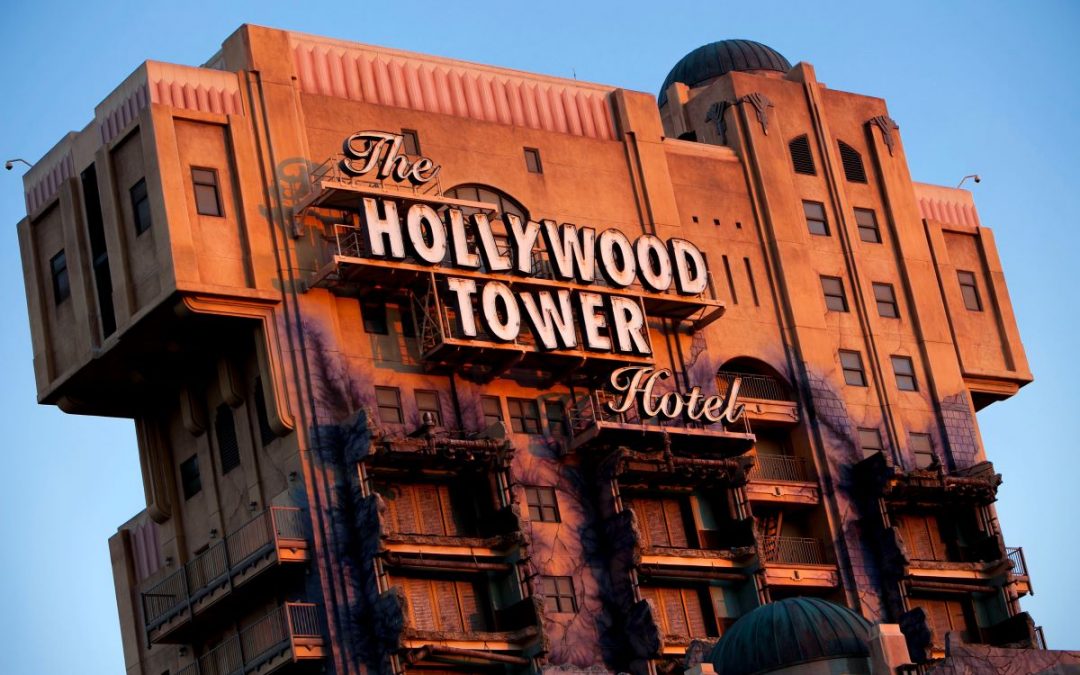 Exclusive story of the Hollywood Tower Hotel! FIVE PEOPLE DIE IN ELEVATOR-HOLLYWOOD STUDIOS is the amazing legend that Disney World has brought to life in the thrilling Tower of Terror! At this attraction, you will see the five ghosts that continue to haunt the structure of the Hotel since the broken elevator claimed their lives.

Here is the story: On Halloween night in 1939 five people from different social backgrounds were at the Tip-Top club located on the top floor of the Hollywood Tower Hotel. Unfortunately the regular hotel elevators were out of commission so they all decided to enter the service elevator on and it was here that the fateful event occurred. A tremendous lightening storm was raging and as soon as they entered, the elevator car was stuck and plunged to the bottom. All five people perished.

The fatalities were, Sally Shine, a young child star with more than 20 short films to her name. Emmeline Partridge, Sally’s nanny; who was very protective of Sally; Caroline Crosson a sensational, up and coming actress and one of her handsome admirers Gilbert London. The fifth and last doomed passenger was Dewey Todd, Jr. Although his father, Dewey Todd, Sr. built the Hollywood Tower Hotel, the junior Dewey worked as a bellhop, perhaps to work his way up in his father’s business.

All the occupants of the elevator were killed on impact. It has been reported that the bodies were removed in secret, to avoid unfavorable publicity, while Dewey Todd, Sr. immediately closed the doors of the hotel.

Dewey Todd Sr. built the 12 story Hollywood Tower Hotel within view of the famous Hollywood sign in the Hollywood hills. It was a distinctive fashionable 1930s hotel which had bold geometric shapes and a somewhat Southwestern design. The top floor housed a first-class restaurant and dance hall, the Tip-Top Lounge.

Then, in May 2004, the hotel opened its doors again, offering tours of its historic and glamorous facilities. Despite the layers of dust, cracked walkways and overgrown weeds, the hotel looked the same as it did the night it closed – except the elevators. Behind the “Out of Order” sign, the elevator doors appear to be severely damaged and bent – clues from that mysterious incident.

So what exactly happened here?  As a visiting guest to the Hollywood Tower Hotel, you are invited into the Library to find out about when, FIVE PEOPLE DIE IN ELEVATOR-HOLLYWOOD STUDIOS.

A lost episode of “The Twilight Zone” tells the story of what happened on that fateful night and invites you to step aboard a service elevator that is still in operation. Of course, what happens on that elevator is a mystery you’ll have to experience for yourself! Isn’t it strange that the elevator bell is shaped just like Mickey?

Today you can experience the Hollywood Tower of Terror. It looks just as it did that historic night, with luggage left on rolling carts, mail still in room slots and an unfinished card game resting on a table in the lobby. The entire property looks as if the former occupants might show up and resume their lives at any moment.  Stick around and you will more than likely see the five ghosts that continue to haunt the structure. Walk through the still untouched, cobwebbed lobby that heads right into the library. This is where you will wait for the same service elevators to the top of the building. Rod Serling of “The Twilight Zone” will be your host. He will tell you the history of the hotel and the gruesome details of the fateful night.

If you’re brave you can enter the elevator and experience the same fateful ride. Just as the elevator moves upward, you will hear the eerie voice of Mr. Serling. He tells about the hotel and the ghosts inside. The elevator car will pitch forward, and then suddenly it drops faster than gravity, causing you to rise up from your seats. The experience might cause a sudden increase in adrenaline and excitement. You might even decide that you are need more than one trip to make sure you get all the details!!

This Ghost Story is brought to you by Orlando Ticket Connection. It is the back Story of how Disney World’s Hollywood Tower of Terror became one of the most popular attractions at Hollywood Studios.

Orlando Ticket Connection is your vacation planning genius and has all your Discount Disney Tickets!