As Walt Disney World and Disney’s Hollywood Studios prepare to welcome guests to Star Wars: Galaxy’s Edge, some changes to current entertainment are about to take place. The March of the First Order, the daily procession from the front of the down Hollywood Boulevard in Hollywood Studios is coming to a close. The March of the New Order is Making Its Final Stand on July 6th and will hold its final performance. 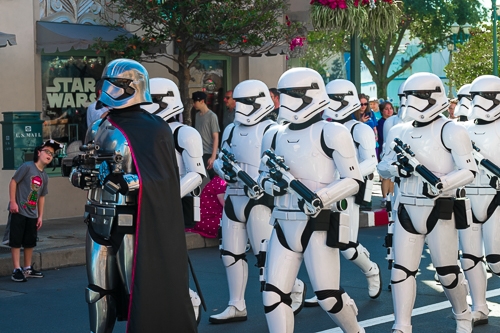 March of the New Order is Making Its Final Stand

Captain Phasma and her squad of First Order Stormtroopers, The March of the New Order is Making Its Final Stand on July 6th and are being redeployed to patrol Star Wars: Galaxy’s Edge when it opens on Aug. 29, 2019, at Disney World. In addition to the Stormtroopers, guests will be able to see Kylo Ren at the First Order Encampment. Rey and Chewbacca will also be on hand to greet those visiting Batuu. The removal of the Stormtroopers near Launch Bay also seems to check out as there will reportedly be roaming Stormtroopers inside Star Wars: Galaxy’s Edge. Instead of bringing in additional cast members to fulfill this role, Disney will bring over their existing Stromtroopers to take on the role around Batuu.

To prepare them for the trip to Batuu, the First Order Stormtroopers will return to their Star Destroyer for a short furlough beginning July 7. Guests will once again have an opportunity to interact with them when Star Wars: Galaxy’s Edge opens on August 29. When the Stormtroopers return, they will wear new different costumes (it’s unclear if they will look the same or if they will feature new details).

March of the New Order is Making Its Final Stand and finally, as of July 7, 2019, guests who take part in the Star Wars Guided Tour will have the opportunity to march with Star Wars characters from the Star Wars: A Galaxy Far, Far Away stage show in place of the First Order.