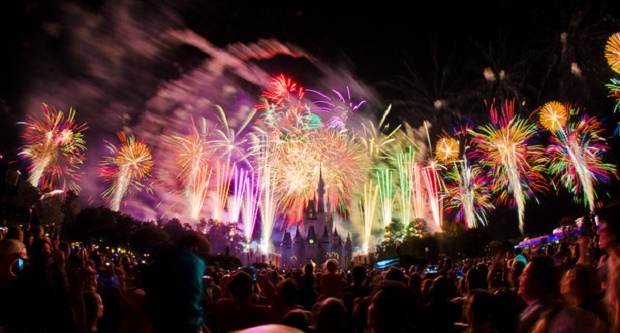 Orlando is the place to be, when the ball drops on New Year’s Eve 2019, so many things to do to bring in the new year’s you will be hard pressed to make the decision where to go! If you really look forward to New Year’s 2020 at Orlando Theme Parks then read further to get the scoop on what’s happening!

MAGIC KINGDOM: At the Magic Kingdom you know they know how to do fireworks, and they don’t disappoint when it comes to New Years Eve celebrations. On New Years Eve you’ll find 2 fireworks shows. The Fantasy in the Sky Fireworks first showing is at 6:30pm and the second starting at 11:50pm.

Frontierland and Tomorrowland also host kid friendly dance parties from 7pm – midnight, usually on both December 30 & December 31. You’ll find DJs playing Radio Disney hits, and you might even see a character or two.

Epcot: On Dec. 31, ring in the New Year more than once at the World Showcase, where the clock will strike midnight at different times in all member nations’ pavilions, accompanied by a festive announcement and fireworks. Additionally, the American Gardens Theatre will host live music, and Illuminations: Reflections of Earth will begin at 11:40 p.m., followed by a countdown to 2020.

Disney’s Animal Kingdom: Celebrate the New Year with specially themed food and beverage offerings and much more! Join  at Animal Kingdom for a fun and festive New Year’s Eve as the park stays open until midnight! DJs will keep the night moving in Discovery Island, DinoLand U.S.A. and Asia. The evening will also include special countdown-to-midnight on the Tree of Life!

Disney’s Hollywood Studios: Gather around the World Showcase Lagoon to see Epcot Forever, followed by a countdown to 2020 and a special New Year’s Eve display.

Looking for an upscale New Year’s Eve party? Check out EVE at Universal CityWalk. Designed for guests 21 and up, this separately-ticketed event includes unlimited gourmet cuisine, live bands and DJs – including a performance by DJ M-Squared – access to six CityWalk clubs, plus Orlando’s largest outdoor dance floor. The only time you won’t be dancing is at midnight, when we’ll pause for a champagne toast and a breathtaking pyrotechnic display. Tickets for EVE are now on sale – learn more and purchase your tickets.

SeaWorld Orlando: Celebrate our connection to the sea, sea life and the world we share as we ring in the New Year, SeaWorld style. A spectacular musical celebration and bold fireworks display will send a wave of welcome to the New Year ahead.

On December 31, celebrate New Years Eve at SeaWorld Orlando. Vibrant fireworks will fill the night sky and festive entertainment will take place throughout the park, including interactive DJ stations, craft beers and delectable bites. At the end of your stay this New Year’s Eve, make sure to visit the great musical attractions set up and the exciting fireworks display. Watch the night sky erupt into bright, fantastic colors as you celebrate the New Year with your family and loved ones.

LEGOLAND Florida: is the perfect place to ring in the New Year before bedtime. Move and groove at an exclusive dance party and wind down the year with LEGO-inspired fireworks – all before midnight. Kids’ New Year’s Party is included with all forms of Park admission – no extra ticket or cost required! End the night with our 7 p.m. fireworks spectacular in the skies above Lake Eloise; before showtime, pick up a free pair of viewing glasses to see a special LEGO surprise in every burst.On Tuesday, Dec. 31 only, join us as we drop a giant LEGO brick while we count down to 2020 at the kid-friendly time of 8 p.m., followed by our biggest fireworks show of the year!

As we close out another wonderful year, Orlando Ticket Connection would like to thank all of our customers for helping us maintain our low prices and great customer service! We lift our glasses to you in a toast!! WELCOME 2020!!